Protect your plants from pests! A wide variety of organic pesticides available in the Showroom.

View cart “Cann-Care AzaPRO (4 oz)” has been added to your cart.

AzaPro is a botanical insect growth regulator (IGR) that controls a wide range of insect species. AzaPro is a broad-spectrum insecticide/nematicide utilizing a highly bioactive form of azadirachtin. AzaPro has a dual mode of action, acting primarily as an Insect Growth Regulator (IGR), and its residual formula acts as a repellent. Controlling more than 300 different insect species, AzaPro can safely be used up to the day of harvest.

The AzaPro formulation contains 75% less oil carrier than competing brands. The result is clear: AzaPro will not leave an oily visible residue on the treated produce or fruit. For growers concerned about crop oil loading AzaPro can help reduce the season long accumulation of oil which is known to affect plant vigor.

AzaPro is a proven IGR that kills insect larvae or nymphs before they become reproducing adults. AzaPro is deadly to sucking and chewing insect pests yet has minimal impact on non-target beneficial species. AzaPro kills larval stages and nymphs by interfering with the insect molting hormone (ecdysone).

Whiteflies and other insects that feed on the undersides of leaves can be difficult to control with sprays directed only over the top of the plant. AzaPro penetrates the plant by translaminar movement to provide control of these hard-to-reach pests. Repeated applications of AzaPro build a “barrier” within the plant to prevent establishment of large pest populations. 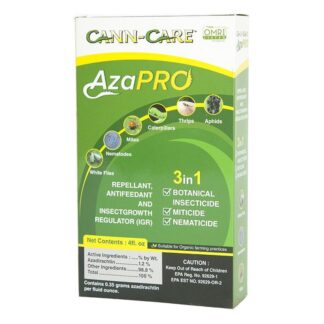